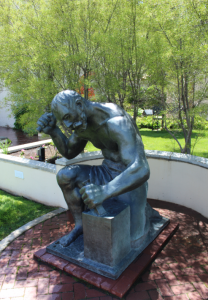 The purpose of the Springville Museum of Art (SMA) is to provide quality life-affirming art, cultural experience, and educational opportunity to our growing community and diverse populations.

The Museum encourages our youth to develop into thoughtful individuals and caring human beings. We recognize the seed of potential within each individual, and we seek to nurture growth through the creative process, positive cultural values, an acquaintance with excellence, and a belief in the beauty of life. The Museum focuses on traditional aesthetic values through life-affirming Utah, Soviet, and American art.

The belief of Museum founders John Hafen and Cyrus Dallin that the arts “refine the minds of youth and build character in all people” continues to guide the mission of the Springville Museum of Art to this day. To this end, the Museum plays a unique role in Utah and the Intermountain West.

1. The Museum is a 501 (c) (3) charitable non-profit institution whose mission is to collect, preserve, exhibit, research and interpret the visual fine arts [sculptures, paintings, watercolors, drawings and prints] through its permanent collection and artwork placed on loan for exhibition.

2. The Museum collects and exhibits original visual fine art of integrity based on the following priority:

3. The Museum provides instructional and educational art programs to help people enhance their creative talents, strengthen their character, and appreciate beauty. It also seeks to promote a sense of artistic quality and understanding of cultural development.

4. The Museum seeks to contribute toward the economic vitality of the community by establishing a healthy climate for tourism, art related businesses, and arts organizations in Springville. It seeks to be a cooperative partner between city government and the SMA Association.

5. The Museum carefully considers Springville’s community standards and family values when developing its collection and exhibitions, and when implementing its programs and underlying artistic philosophy. The Museum seeks to create a friendly atmosphere and satisfying experience for Museum visitors through its staff and volunteers.

6. Considering the traditionalist history of the Museum and the conservative orientation of most Springville residents, the Museum selects Board of Trustee members and hires staff members who have experience and education in traditional, conservative realist art. Staff members should also have an understanding of the modernist aesthetic paradigm.

1. The Springville Museum of Art reserves the right to refuse exhibition or collection of any work of art it believes does not uphold local Springville community standards and values. When necessary, the SMA Association Board of Trustees, representing the community’s interest, will make this determination by vote of its members according to policy. Because of the First Amendment right of the Museum at its own premises, the Museum may choose not to exhibit any work of art that it deems offensive or inappropriate based upon its own principled criteria (see part 2 and 3).

2. Art presented for acquisition or exhibition that has the following characteristics must be brought by the Museum's director to the attention of the SMA Association Board of Trustees for review and action.

4. Works of art curated by Museum staff, or its appointed jurors, and deemed not to conform to this policy will be submitted to the Board of Trustees. Art is considered to still be in the jurying process until after it has been reviewed by the Board of Trustees and a decision has been made.

5. Any works of art coming to the Museum in a traveling/curated form may be withdrawn from exhibition or zoned. This decision is made at the discretion of the Association Board of Trustees or the director. A notice will indicate that the work of art has been zoned and its location will be identified for patrons.*

6. The Museum does not struggle against a perceived yoke of community standards or family values. Rather it exalts and advocates them through the educational programs it offers and the art it displays and collects. The Museum does not seek to deconstruct society, but rather to encourage the best of our society’s achievements, ideals, and traditions.

*Zoning is the placement of a work of art in an area of the Museum where the public, especially young children, cannot see it without prior warning and/or approval. These controlled conditions allow the work to be viewed by those who make a conscious and informed decision to do so.